Scouting provides adventurous activities and personal development opportunities for young people aged 6-25. Personal development means promoting the physical, intellectual, social and spiritual well-being of the individual, helping them achieve their full potential. In Scouting, we believe that young people develop most when they are ‘learning by doing,’ when they are given responsibility, work in teams, take acceptable risks and think for themselves. 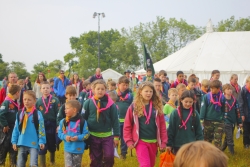 Avon Scout County is one of the largest Scout Counties in the UK.  We have nearly 13,000 members and over 4,000 volunteers. We cover a large area with Bristol in the centre of the County, from Weston Super Mare in the south to the villages surrounding Thornbury, South Gloucestershire in the North. It takes in the cities of Bath and Bristol and towns of Nailsea, Portishead and Keynsham.   To make this large area more manageable we section it into nine Scouting Administrative Districts

Scouting membership has shown significant growth in the last twelve years.  In 2003 there were fewer than 10,000 Scouts across the County.  Now, the figure stands at nearly 12,000.

The number of adult volunteers has continued to rise since 2003 when there were 1813, to 3952 now.  Despite this increase, the thirst for fun and adventure from more young people want Scouting has grown.  There are currently over 2000 young people on the waiting list wanting to join across the County.